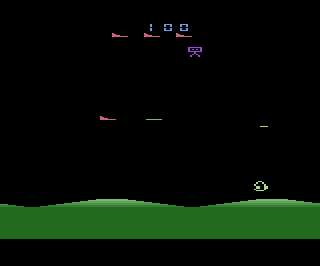 This game is similar to Defender without the humanoids to rescue. Players must fly around the screen, shooting any incoming ships that appear. Watch out for the satellite-like object, at the top of the screen, as it drops bombs. Play simply continues from wave after wave of ships, until the player loses their last ship.