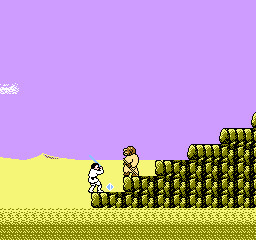 Star Wars is a Famicom exclusive side scrolling platform game by Namco. Although the game is loosely based on the epic feature film of the same name, the story is definitely not the same and Namco decided to tell it their own way. As expected, Luke Skywalker is the main protagonist of the game - after listening to the holographic message recorded into R2-D2 by princess Leia, Luke embarks on a journey to find his companions held prisoners across the galaxy. On board the Millenium Falcon, he goes from planet to planet and rescues R2-D2, Obi-Wan Kenobi, C-3PO, Princess Leia, Chewbacca and Han Solo. He also fights countless incarnations of his arch-nemesis Darth Vader who unexpectedly turns into terrifying monsters throughout the game. Luke's main weapon is his trademark light-saber and a blaster can later be picked up. But most importantly, the young Jedi can control The Force and use it to attack his enemies or to reach inaccessible areas. Blue Force crystals are left behind by defeated foes or hidden inside blocks - the more Luke collects, the more Jedi powers he gains and the more powerful he becomes. He can fly in the air, freeze enemies, run faster or become invincible for a short amount of time. The characters that Luke rescues also play important roles in the game and they must be called in specific situations to assist the young Jedi.