In the game the player have to avoid the platforms that are coming towards the player character, Ziggy the Mazeman. 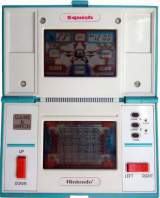 Released on April 17, 1986 in Japan. It only came in Pocketsize boxes. The game is loosely based on Devil World.

The game's name comes from the fact that Ziggy gets Squished if a platform hits him. The top screen contained game information, while all of the action took place on the bottom screen. This and Zelda were the only two games to have a format like this when it came to Multi Screen games.