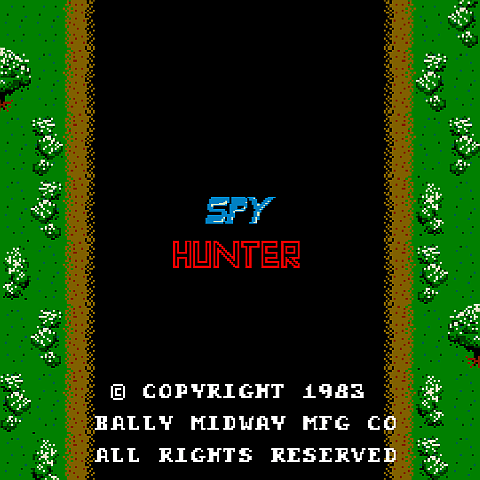 Spy Hunter is an action/driving game. It places the player as the driver of a G-6155 CIA Prototype Interceptor sports car. The object of the game is to travel the freeways and waterways, hunting down and destroying as many enemy vehicles as possible, all the while not harming civilian vehicles. The view is top-down and the screen scrolls vertically underneath the player's car.

The game begins with the player driving the G-6155. Soon, the player starts to encounter enemy vehicles which try to force the player's car off the road and crash. Each enemy vehicle has its own special feature, such as tire slashers or bulletproof armor.

Points are scored for driving on the road and for destroying enemy vehicles. There is a lead-in time when the player has an endless supply of cars. After this time expires, the player will lose a life each time the car crashes. Extra cars can be earned with high scores. The first extra car is earned at a default value of 30,000 points, but this value can vary depending on settings.

The player must be careful to avoid harming civilian vehicles on the road. There are three types: blue automobiles, pink automobiles, and motorcycles. Hurting these vehicles causes scoring to stop briefly, during which time the player's score reads 'NO POINTS'.

There are six enemies in all, each with their own special characteristic :
* 'The Road Lord' cars have bulletproof armor plating; machine guns are ineffective against these cars. Tagline 'Bullet Proof Bullies'.
* 'Switch Blade' cars have tire slashers. Knives pop out of this car's tires and can force the player's car to crash if they touch his tires. Tagline: 'Never To Be Trusted'.
* 'The Enforcer' is a limousine with a shotgun-toting thug who shoots at the player's car. Tagline: 'Double Barrel Action'.
* 'The Mad Bomber' is a helicopter which drops bombs. This enemy can only be destroyed with missiles. Tagline: 'Master Of The Sky'.
* 'Barrel Dumper' is a boat which drops lethal explosives into the water. Tagline: 'Ecologically Unfriendly'.
* 'Doctor Torpedo' is a boat which shoots torpedoes at the player's speedboat. Tagline: 'Not Actually A Doctor'.

Occasionally a message appears on screen that says 'Bridge Out - Detour on Left'. Then the player must drive his car into a boathouse located alongside the road, otherwise he will crash into the water and lose a life. After driving through this house, the player's car is turned into a speedboat on a river, with enemy boats which try to destroy the player. In this area, if the player uses the oil slick, the boat instead issues a line of fire which destroys any boat directly behind the player. In this area, occasionally the river splits; the left side continues the river, the right side causes the player to drive through another boathouse where the boat is changed back into the car.

Later in the game the player gets a warning that there are 'Icy Roads Ahead', then the player enters an area that has a white road which is very slick. The icy roads section eventually ends and goes back to normal roads. Icy roads occur again on and off during the rest of the game.