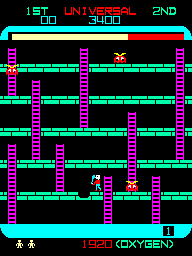 Influential computer game designer and writer Chris Crawford calls Space Panic "the granddaddy of all platform games", as it predates Nintendo's Donkey Kong (from 1981) which is often cited as the original platform game. Space Panic lacks Donkey Kong's jump mechanic - the main character instead digs holes in the platforms into which he must lure the aliens. He must then hit them to knock them out of the hole and off the screen. In later levels, two or more holes must be lined up vertically in order to dispose of the aliens. There is also a limited supply of oxygen.