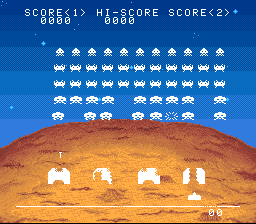 Taito's all time classic and its wave of descending aliens is back for the Super Famicom system. Does Space Invaders still need a presentation ?.. Here we go. A fleet of alien invaders moves across the screen and slowly descends towards Earth, with their now popular continuous beeps slowly frying your brain. If one of them lands on the ground, then it is game over. The player controls a gun at the bottom of the screen and his mission is to stop the invasion. To make this task a bit easier, the player can hide underneath destructible shields. The game offered here is the original arcade game, including the black and white version, but also the colored-layer and the upright edition with the moon backdrop. However, a two-player battle mode has been added where two opponents can compete against each other in a split screen battle.

It was then re-released on December 1, 1997 as a Nintendo Power edition.

Taito most probably released this version to commemorate the 15th anniversary of the game originally released in 1978.

This game is basically the Super Famicom conversion of the arcade title "Space Invaders DX" without the "Parody Game" mode.