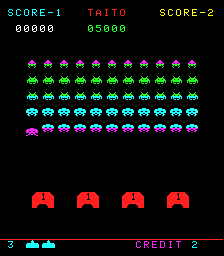 The sequel to the legendary "Space Invaders"; Part II's game-play is virtually identical to the original game, with the player once again moving a laser base back and forth along the bottom of the screen, shooting endless waves of aliens marching downwards towards the player. Once again flying saucers cab be shot for extra points.