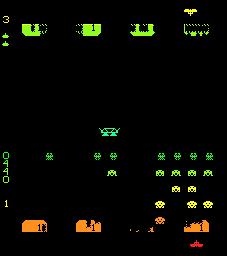 Space Invaders II allowed for 2-player simultaneous competitive play (although both players could work together). Besides shooting the invaders, one of the goals was to destroy your opponent (either CPU or another player) and gain his ships!