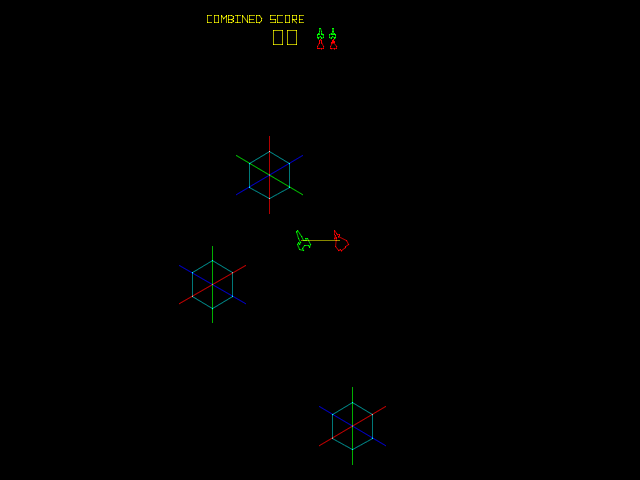 Space Duel is a 1- or 2-player game with a color X-Y video display. This display, with its 3-color guns and higher voltage, has the same technology that was used in previous Atari black-and-white X-Y displays. However, the screen now displays dazzling color and unique visual effects in a spectacular multi-dimensional video display.

Space Duel offers players a choice of 4 different game versions. One player can control a fighter or a space station. Two players, playing at the same time, can control fighters or a space station. The game offers players 12 different targets (7 split when hit), and 18 different waves. At the beginning of each wave, objects enter from the screen edge. The player(s) then tries to shoot and destroy the objects. The wave ends when all the objects are destroyed.

A ship may fire as many as four shots on the screen at one time. However, if a ship is damaged, it may fire only one shot on the screen. Also the ship is slower to react. In space stations, a second hit to either ship destroys that ship. Then, the fuse between ships starts to burn, and the other ship explodes.

In the fighter game, players may shoot each other without losing a life. Instead, the ship blinks and disappears. After a period of time, the ship reappears in a different location. If one player loses all of his ships before the other player, his last ship returns to the screen as a damaged ship. It is possible to earn a bonus ship while damaged.

Shields protect a ship from all saucer shots and collisions. Shields wear out with time or if hit by targets. Space stations have more than twice as much shield energy as fighters.

At the end of each wave, a bonus wave begins and a low humming sound is heard. 'BONUS LEVEL', and the number of points for that level, flash on the screen. A box appears at the screen edge and ships cannot leave that boundary. Fuzzballs, stars and saucers enter and attack the player. A fighter, when shot by the other player, either just before or during the bonus wave, will not reappear until the next wave. The bonus wave ends when all targets are destroyed, or the humming sound reaches its highest pitch.

Other targets enter as the game progresses. When the number of targets is less than the wave number, or if no splitting targets have been hit in some time, saucer enters and shoots at targets and ships. The saucer shots become more accurate as play continues. Saucers may also enter as a pair. They shoot at, but do not destroy, each other. Anything caught between them will be shot. Each time the pair goes across the screen, the distance between them increases.

A player's ship may be destroyed by a shot or collision. The game is over when all ships are destroyed. 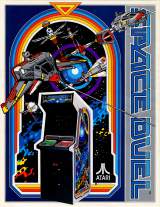