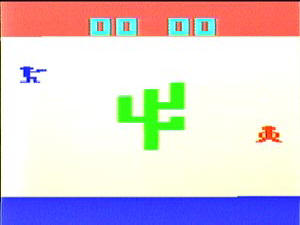 A gun fighting game with a Western setting. The players control a cowboy on the screen and must try to hit each other with their pistol fire. The cowboys cannot shoot while moving, instead they must enter a firing position after which the joystick is used to aim the gun rather than walk. After a shot the player cannot exit the firing position until the bullet has hit something. A stage coach and a cactus offer cover for the players. Different game variations offer different game rules such as the cover being breakable, being able to get up immediately after shooting, or having a bullet limit. All game variants can also be played in a target practice mode where there is no second player present.