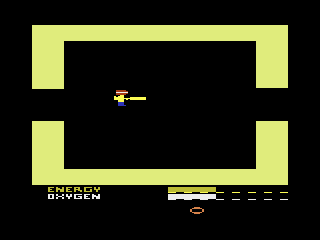 First there was one alien space station, then there were three. Now there are eight. If left unchecked, laser gates, dragons, and other evil creatures will wipe out the human race.

To destroy each station, you'll have to confront the aliens in face-to-face combat and discover the secret destruct code. Once you have the code, use it to activate the station's self-destruction mechanism. Then the race begins. Can you get to the teleport room before the station explodes into the vacuum of space?

Are you ready? Remember, you'll need precision battle skills, a keen sense of direction, speed, and pure guts to save the human race.

Your Quest: Destroy all eight alien space stations. The secret orders you received list basics on how to destroy a station. The rest is up to you.
1. Search through the rooms and find the secret destruct code on each level.
2. Find the self-destruction mechanism and activate it by entering the secret destruct code(s).
3. Race to the teleporter room and escape the alien station before it explodes. The teleporter automatically sends you to the next station.

Along the way you pick up weapons and other objects and fight alien creatures such as Spinner and Dragon. Fighting aliens takes precious oxygen and energy, which you can replenish each time you destroy all aliens in a room.

The game ends when you destroy all eight stations, run out of oxygen, or don't make it to the teleporter room in time after activating the self-destruct mechanism. When the game ends, the title screen appears with your total score.