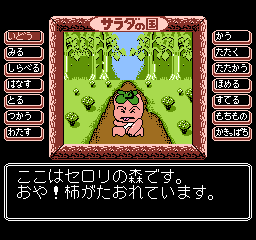 
(Salad no Kuni no Tomato Hime)

Salad no Kuni no Tomato Hime is a graphic/adventure game by Hudson Soft. The game takes place in the Salad Kingdom, a peaceful place where fruits and vegetables live in harmony with each other. It is ruled by the respected King Onion (aka King Broccoli), whose wisdom protects the kingdom from evil and unwelcome intruders. Unfortunately, a clan led by the malevolent Kabocha Dai? (aka Minister Pumpkin) decides otherwise - from his castle, he establishes a new social order and sends his army in waves in an attempt to conquer the Kingdom. King Onion and his daughter Princess Tomato decide to assemble an armed resistance, but she soon gets captured and imprisoned in Pumpkin's castle, destined to marry Minister Pumpkin's son against her will. The noble Ky?ri Senshi (aka Sir Cucumber) and his young persimmon Kakippachi (aka Percy) seem to be the kingdom's last hope, and they embark on a long journey to rescue the princess and save the day. The game displays the surrounding scene and various commands (such as move, talk, check, use and so forth) allow the player to interact with it. Sir Cucumber can look for items, talk to other people or gather information and hints. Our hero also faces rare enemies throughout his journey - battles use an unusual system based on traditional Japanese 'Jan-Ken-Pon' (aka 'finger wars' battles), and this dual challenge follows a blood pumping two rounds rock-paper-scissors formula where each direction on the controller translates as a form (Up/Down. for Stone, Left for Scissors and Right for Paper), followed by a phase where the player must guess which direction the enemy's head will face. Interestingly, the player never loses a battle and is given a chance to fight again in the case of a shameful defeat.

Salad no Kuni no Tomato Hime was first released for the PC-6001mkII Japanese computer in 1984. It was then ported to the PC-8001mkII, Sharp X1, FM-77 and finally for the MSX. The original game didn't use menus but an English text parser instead, which is rather odd as the rest of the game is entirely in Japanese. Interestingly, this was also the case for other early Hudson Soft graphic adventure games, such as Dezeni Land (1983) and Dezeni World (1986). The Famicom port of Salad no Kuni no Tomato Hime followed much later, in 1988. Although the story closely resembles that of the original, all of the graphics were redrawn and several new features were introduced. The most noticeable are the new maze sections, the 'Jan-Ken-Pon' (aka 'finger wars') battles and, of course, the menu-driven interface. The text and graphics were also toned down for a children audience - the original version featured more 'mature' graphics, such as a crucified tomato inside a church early in the game, or some rather scary fire-breathing bananas.