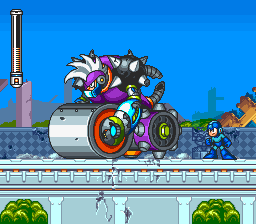 Seventh game in the main Rockman series. Picking up 6 months after the events of Rockman 6, the plot involves the protagonist Mega Man once again attempting to stop the evil Dr. Wily, who uses a new set of Robot Masters to free himself from captivity and begin wreaking havoc on the world. Along with some help from his old friends, Mega Man finds potential allies in the mysterious robot pair Bass and Treble, who are later revealed to be in league with Wily. In terms of gameplay, Mega Man 7 follows the same classic action and platforming introduced in the 8-bit Famicom titles, but updates the graphics and sound of the series for the more powerful 16-bit Super Famicom.