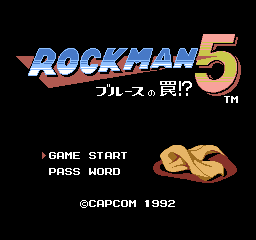 Fifth action-platform game in the Rockman series. Taking place after the events of Rockman 4, Rock's brother and ally Proto Man leads a group of menacing robots in attacks on the world and kidnaps his creator Dr. Light, forcing Mega Man to fight against his brother. Rockman 5 carries over the same graphical style and action-platforming gameplay as the four preceding chapters in the series. The game introduces a new character, Beat, a robotic bird that the player can use as a weapon once a series of eight collectible letters are found.