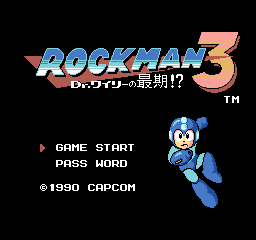 Contenders blast Rockman, in his search for energy Crystals, through a galaxy of mining stations controlled by ruthless robots. An amazing 21 different levels of rapid fire help Mega Man battle against these armies of metal maniacs to gain their super powers. But the rebellious robots won't give up without using every android-annihilator known to Mega Man. That's when players call on Rush, the wonder dogdroid, for special mechanisms that speed them past danger and assist in enemy melt-down. It's man vs. metal as players have more fun than humanly possible.