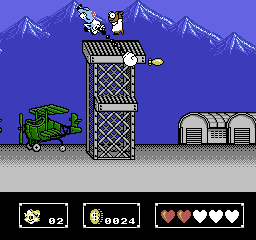 It's a Dance with Danger when Willy tries to rescue Jill!

The hippest cool Kat in New York, Willy, is hot on the tail of local crime boss, Mugsy. The fur's gonna fly 'cause Mugsy just cat-nabbed Willy's girl, Jill, and stashed her away. To find her, Willy has to face hoods on the streets of the Big Apple, duel desperados in the wild west, dog-fight Ace Pilots at 40,000 feet, and avoid being de-railed at an amusement park. But he's not called the Rockin' Kat for nothing, and when he starts break dancin' and body slammin' his enemies, make room on the dance floor!