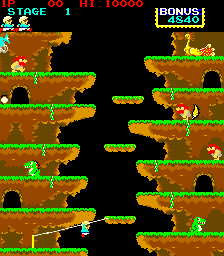 Roc'n Rope is an incredibly difficult yet playable platform game featuring four different levels. The player takes on the role of a an archaeologist whose mission is to return the missing tail feathers to the golden Phoenix. The archaeologist is armed with a harpoon gun and uses it to fire a rope into a platform above, in order to climb up the rope and progress up the level. This is vaguely similar to the superb 'telescopic arm' feature that appeared in Capcom's superb "Bionic Commando".

All levels are patrolled by enemies in the form of dinosaurs and cavemen and all are deadly to the touch. Some cavemen will pull on the harpoon rope while the archaeologist is climbing it. This will result in the player falling from the rope and losing a life. The archaeologist is armed with a light ray that will kill the enemies.

A breakdown of the game's four levels :

* The first level is possibly the most difficult in the game. Players begin at the bottom left of the screen and must work their way up to the Roc, who is sitting at the upper right of the screen. There are many layers of ledges coming out from the sides of the screen. While the middle of the screen is open to the sky (except for a few floating platforms). To reach the top, players must use the harpoon gun to climb diagonally back and forth until they reach the top (ensuring that the Phoenix feathers have been collected on the way).

* The second level is set underground. There are a lot of dinosaurs on this screen and far fewer platforms than on the first level. Many of the platforms stretch completely across the screen, so there aren't many pitfalls to be wary of. Once again, players must get the archaeologist to the top of the screen to complete the level.

* The third level is set outdoors. A 'ferris wheel' style rotating platform sits in the center of the screen, but this can be avoided if players don't wish to use it. The easiest route to the top is on the right-hand side of the level.

* The fourth and final level is shaped a little like a mountain. The player's main concern here is a large waterfall in the center of the screen. Players must time their harpoon climb just right to avoid being killed by the deadly waters. Once this level is finished, the game starts over with an increased level of difficulty. 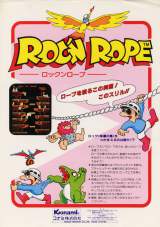