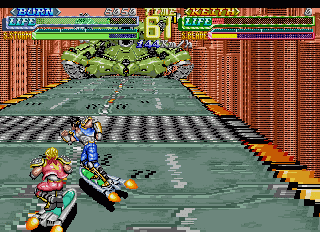 A one or two player fighting/racing game that takes place on a 3-D rendered track, set in a futuristic city. Each player rides on a hover board and must jump, kick and punch the many enemies who constantly attack, as well as punching or jumping over trackside obstacles. An end-of-level boss awaits the players and must be destroyed before the players can progress to the next level.