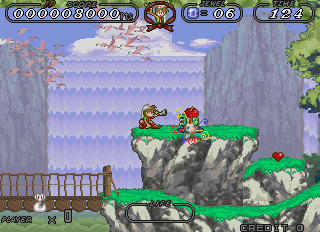 A 2-D side scrolling platform game. Control a boy with a magical horn and rescue helper animals along the way. After rescuing an animal, you can call upon it with your horn and ride them, provided you have enough of the right coins needed to call them. The animals have different abilities to help you get through certain sections of each stage.

This game is an unreleased prototype game. The gameplay is very complete so it was most likely canceled after being tested at arcades. A shame considering that it is quite fun to play.

The US version is slightly different, it has the 'Winners Don't Use Drugs' screen.
SOURCES
Game's ROM.