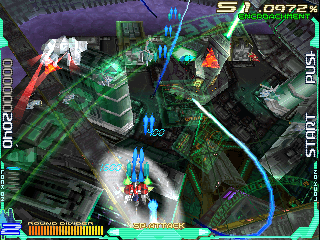 The third installment and prequel of RayForce, the plot centers detailing the events during the timeframe of the supercomputer called the Neuro-Computer Con-Human gaining sentience and rebelling against its human creators, a direct result of a misguided scientist trying to bond a human clone to Con-Human mentally. Now, against Con-Human's massive attack forces laying siege to the Earth, exterminating and cloning humans, a mecha-neurologist jacks in to the Con-Human system in an attempt to regain control of the rogue machine by means of the computer viruses, known as the Waveriders, into the Cybernetics Link, engaging Operation Raycrisis to cease the supercomputer's destructive actions permanently and prevent it from causing more havoc in the future.

However, even when Operation Raycrisis leaves Con-Human wrecked from the inside, it was too late to reverse the damage it has done. Furthermore, what is left of the human race has left for the space colonies as refuge from the destruction. In the end, years later, with the unveiling of the X-LAY starfighter and the ships of the fleet, Terran Command and the remaining humans initiate one final assault on Con-Human, who has turned the Earth into a bleak, metal graveyard. One final assault, in which will end the cybernetic nightmare once and for all, destroying the planet they've called home in the process. And that assault will be called: Operation RayForce.