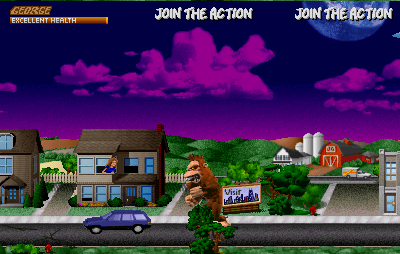 A sequel to the 1986 original, Rampage World Tour once again has George, Lizzie, and Ralph bent on a trail of destruction. The 'World Tour' of the title refers to the fact that the action now takes place around the entire world, instead of just North America. Graphics are much improved and a kick button has been added to allow even more chaos.

Hidden bonus items have also been added to the game; two examples are an item that allows any player character to transport to almost any location in the game instantly. A second gives the players more destructive power. Some stages have a vat of toxic chemicals that can mutate any player character into a huge purple bat-like creature called V.E.R.N (Violently Enraged Radioactive Nemesis) for the duration of the stage. 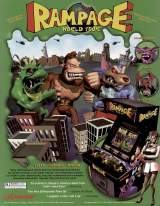