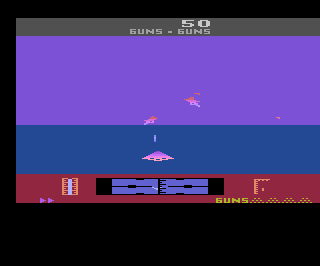 The object of the game is to use your state-of-the-art delta-wing fighter to defeat the enemy fleet in air combat. Your fighter plane is equipped with guided missiles, proximity missiles, and rapid-fire machine guns. The game consists of five missions of increasing difficulty.

When the game begins, your jet starts up, increases speed, and takes off from the air field. The scene then switches to the combat screen.

At the end of each mission, you must refuel in flight. Use the left controller's fire button to control your speed during the in-flight refueling sequence. Hold down the button to accelerate, and release the button to return to normal flying speed. Using the long-range radar and missile lock, fly to the fuel tanker. When you are close to it, the tanker will lower its fuel hose. Once the nose of your jet is locked into the fuel hose, your mission is complete. You receive bonus points for your remaining fuel and weapons and then advance to your next mission.