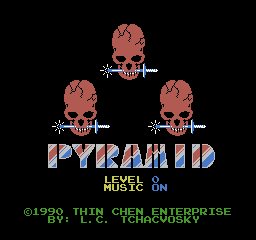 We have known for decades that the ancient Egyptians were the first to play games, but who would have ever guessed they could create a game that was this much fun to play. With bombs, hidden surprises and game play that requires both planning and quick reflexes this is truly the most challenging game of its kind.

There is just one rule to playing PYRAMID, don't let the pit fill up with stones. As each stone falls from the sky it must be turned, twisted and carefully fit together perfectly. Like the great pyramids, the stones must fit together so precisely that not even a feather could slide between the cracks.

How much mind-bending video game excitement can modern game players handle? There is only one way to find out. Play PYRAMID, the ancient Egyptian game from the Queen of Fun.