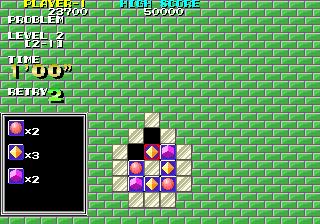 This is a puzzle game in which the aim is to move symbol-bearing blocks onto identically-symboled blocks in order to eliminate them. Blocks can only be moved left or right, or dropped downwards.

The order in which the blocks are eliminated needs careful planning, as it's sometimes necessary to destroy three blocks at a time, or use blocks as bridges for other blocks. Some puzzle screens have moving background blocks that act as elevators, making careful timing essential.

Should the player make a mistake and destroy or move the wrong blocks, each puzzle screen allows for a set number of 'retries' (depending on the dipswitch settings). A retry resets all tiles to their original positions.