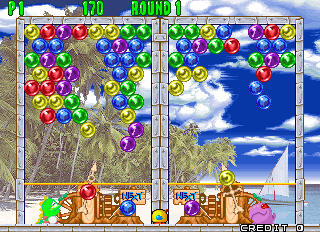 Puzzle Bobble 2 is an arcade puzzle game offering one or two-player competitive play and is the first sequel to the hugely successful original.

As with the first game, the aim is to clear each play area of the coloured bubbles clustered in the upper half of the screen. This is achieved by firing bubbles up the screen - with the angle of trajectory dictated by the player - at the clusters of bubbles. The aim is to forms chains of three or more like-coloured bubbles, making them disappear.

At regular intervals the 'ceiling' of the play area - together with any bubbles stuck to it - will drop one row down the screen, decreasing the size of the play area making life more difficult for players. The game is over when the bubbles reach the very bottom of the play area.

This game is known in US as "Bust-A-Move Again".

This game runs on the Taito F3 System hardware but it was re-released (licensed to SNK) on the SNK Neo-geo MVS hardware in 1999 as "Puzzle Bobble 2 [MVS]".

If you look closely at the bubbles, you'll notice that the enemies from "Bubble Bobble" are trapped inside; a different enemy for each different colored bubble. The following chart shows which enemies are trapped in which color bubble :
Legend : Color of Bubble => "Bubble Bobble" Enemy Inside
Blue => Zen-Chan
Yellow => Pulpul
Red => Invader
Green => Drunk
Purple => Monsta
Orange => Banebou
Black => Hidegonsu
White => Mighta

On the last level, you will see characters from "Bubble Bobble" & "Rainbow Islands".

Stepehn Krogman holds the official records for this game with 75275450 points (factory setting).

Unlike Puzzle Bobble, there is a way to get more than 1.31 million points. It's possible to get 2621440, 5242880, or even 10485760 points! To do this :
* You need 17 or more bubbles.
* One of these bubbles must touch exactly one bubble of a group of
similarly colored bubbles.
* The bubble that pops the similarly colored group of bubbles must
not touch the group of 17 or more bubbles.

Bonus points : are awarded based on how fast you completed the stage.

NOTE: These are only ports released outside North America. For North American ports, see "Bust-A-Move Again".