The classic Puyo Puyo finally arrives on the PC Engine system! Here is the port of Compile and Sega's popular Tetris-inspired puzzle arcade game originally released in 1992. The gameplay probably doesn't need much of an introduction - multicolored gelatinous beans, called Puyos, fall from the top of the screen in pairs, and the player has a limited amount of time to rotate and stack Puyos and make sure they fit together. If the player matches four or more Puyos of the same color, they disappear and any Puyos located right above them will fall down, setting off potential chain reactions. Each level is designed like a duel where two opponents attempt to subdue each other in an intense Puyo battle - each successful combo or chain releases garbage Puyos to the adversary's side, and if one player's stack reaches the top of the playfield, it is game over. The game features several play modes - a Story Mode when the player battles a slew of enemies, a Two Player versus mode and a no time-limit solo mode. 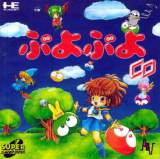