Primeval Hunt is a gun shooting game for one or two players where you hunt prehistoric dinosaurs, including T-Rex, Triceratops, and Velociraptor. The gameplay is free roaming, with players given complete freedom to explore their surroundings. In total there are 10 different types of dinosaurs to hunt across 12 stages. As the player advances through the stages, the dinosaurs become bigger and the difficulty increases. 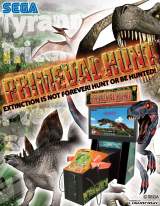