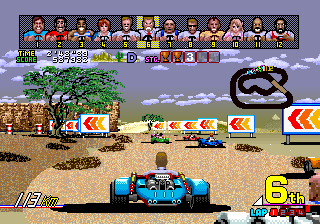 In Power Drift, a single player races against eleven other drivers over any one of five abstract and hugely demanding courses. The game's 25 stages (separated into 5 different races, only ONE of which can be played per game) are constructed of undulating, tilting, roller coaster-esque tracks; featuring jumps, drops and chicanes. On most of the stages, it's possible to 'fall off' the higher sections of the track, crashing to the ground below and losing valuable seconds.

Power Drift's superb Roller Coaster effect was enhanced further with the introduction of a 'tilting axis'; as the player steers left and right, the screen display mirrors the controller's movements and tilts on its axis, in a similar fashion to another Sega game, "After Burner".

Power Drift was yet another visually superb 3-D "sprite-scaling" racing game from Sega and, having already perfected the racing genre with 1986's "Out Run" and the "Hang-on" series; the company charged Yu Suzuki and his team to take the arcade racer in a wholly new direction.