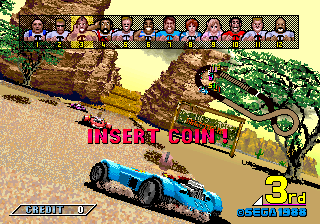 Power Drift is a fast-moving lap-based racing game in which players choose to race on one of five different circuits, each made up of five stages. The game's tracks have a 'roller-coaster' feel to them, with steep climbs, sudden drops and tight chicanes. It's also possible to fall from many of the higher, raised sections of a track, sending the car crashing to the ground below and losing valuable seconds. Each race takes place over four laps and players must finish in 3rd place or better to progress to the next stage. Finishing lower than third place results in a 'game over' but players can insert more credits to continue from the current stage.

In addition to its twisting, abstract courses, Power Drift also features a tilting axis; as players steer left and right, the screen display mirrors the controller's movements and tilts on its axis (in a fashion similar to another Sega game, "After Burner"). The game's difficulty level is determined by the type of car the player chooses to race with. The RED car (with bigger wheels) sets the difficulty level at 'easy', the BLUE car at 'normal', the ORANGE car at 'hard' and GREY car at 'hardest'.

The game's five circuits are labelled from A to E, with each having its own visual theme (for example, circuit A is city-based, circuit B desert-based, circuit C beach-based etc.)

Each course has its own theme song, and they are as follows:
Course A - Side Street
Course B - Like the Wind
Course C - Silent Language
Course D - Adjustment Mind
Course E - Artistic Traps 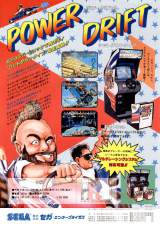