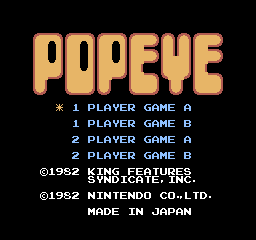 In this port, Spinach is restored when you lose a life, and the ladder in the middle of the dock scene can be used to go up or down. Revision F of the arcade version has these rule variations, too.

Other differences from the arcade version:
1) Each flight of stairs has four steps instead of five.
2) The Sea Hag does not materialize on the sides of the screen to throw bottles. The only bottles in this port are the ones thrown by Brutus.
3) Wimpy does not appear on the left side of the seesaw in the street scene.
4) No sound is heard when Bernard flies in from the left side of the screen in the shipboard scene, and when Popeye punches him for 1,000 points, the sound is the same one heard when Popeye punches bottles and skulls.

The difference between the A and B games is that the B game technically omits the first 3 rounds and begins at Round 4, even though the game may say "Round 1".