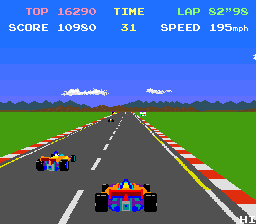 Pole Position is a 1-player game using a color raster-scan video display. Game action takes place at the Fuji Speedway in Japan. The scenery around the speedway consists of green meadows, hills, and snow-capped Mt. Fuji.

The player drives a Formula-1 race car on the track. The first objective of the game is to finish the qualifying lap as quickly as possible. If the player beats the clock, he or she qualifies for the race. If not, he or she drives out the remainder of the time along the qualifying course.

As a qualifier, the player is ranked according to his or her qualifying lap time, from the 1st (pole) position to the 8th. The second objective of the game is to race against the clock and other cars to finish the specified number of laps ('Nr. of Laps' dip switch setting; 3 laps is the default) of the race as fast as possible and to achieve the highest score possible. The player earns points for passing cars, driving on the track, and finishing the race with time remaining. He or she is rewarded with an extended-play lap for completing the first lap within a certain amount of time (depending on the 'Extended Rank' dip switch setting).

The game starts with the player's car behind the starting line and a certain amount of time, in seconds ('Game Time' dip switch setting; the default is 90 seconds), will be on the clock. The player's car must finish the qualifying lap within a certain amount of time (which varies depending on the 'Practice Rank' dip switch setting) to be in the race. If the player does not qualify, his or her car continues on the track until the 'Game Time' elapses.

Racing into the first turn, the player must let up on the accelerator slightly to make the corner. Road signs flash along the side of the track. Depending on how well the player manipulates the controls, he or she can either roar through the hairpin turns like a champion or spin out in a flaming crash. He or she jockeys for position with the other racers, while keeping his or her eye on the clock at the top of the screen. When time runs out, the race is over. If the player has beaten the racing lap time and has seconds remaining, the remaining seconds are added to the extended lap time, which varies depending on the 'Extended Rank' dip switch setting.

The top score achieved by a player appears at the top of the screen. The time allotted for the lap is displayed under the top score. Increasing lap time (in seconds and hundredths of a second) and the speed of the car appears last.