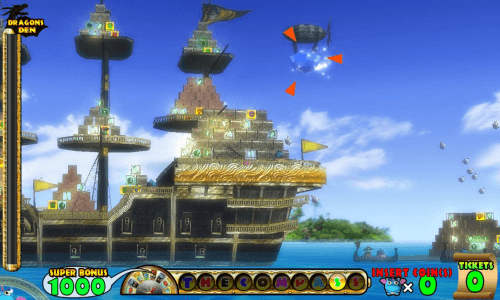 "Pirates of Monster Island" is a fun action packed video ticket redemption game that challenges players to take aim and fire at various targets to win tickets. Players must knock crates off the pirate ships to win tickets. They can also shoot at the letters to complete the word ‘compass’ which will get them a spin of the giant bonus compass which forms the games impressive marquee. But knock off enough crates and players will get a chance in the Dragons Den where massive amounts of tickets are to be won!
- Ticket redemption
- 32” LCD screen
- Pirate ship themed cabinet
- Giant compass bonus marquee