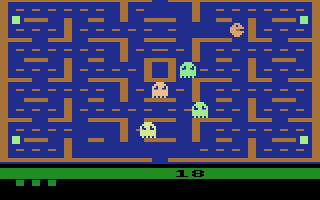 We know that millions of people all over the world just love the PAC-MAN arcade game. PAC-MAN has won the hearts of men, women, and children everywhere. We also know that PAC-MAN has traditionally been an arcade game. Well, we at ATARI know all about arcade games. After all, we make some of the greatest arcade games in the world, and
we know how to bring the same dynamite game play into your home.

The object of the game is to keep PAC-MAN happy and healthy in his home of Mazeland. PAC-MAN starts the game with four lives(turns). The longer he survives, the more points you score. You score a point for every video wafer that PAC-MAN eats. You also score points when PAC-MAN eats power pills, vitamins, and ghosts. Everytime PAC-MAN eats all of the video wafers on the maze, he earns an extra life and a new maze full of video wafers.

The following information lists all of PAC-MAN's nutritional needs, which also happen to be your point-scoring objects.

Power Pills: Power pills are located in the four corners of the playfield. Each power pill is worth five points. When PAC-MAN eats a power pill, the ghosts become a transparent blue color.

During this time, PAC-MAN has the super-strength to overcome the ghosts. This is his big chance to chase and gobble down each ghost. Unfortunately, this great power only lasts a few seconds. When the power starts wearing off, the ghosts turn pink and then back to yellow. (Musical notes stop several seconds before ghosts turn back.)

Vitamins: Vitamins are the two intersecting rectangles in the center of the playfield. They only appear for a few moments and then disappear and reappear. The vitamins are worth 100 points each time PAC-MAN eats them.

Ghosts: The ghosts are the quartet of bad guys chasing PAC-MAN around the maze. If a ghost eats PAC-MAN, you lose a turn(one life). On the other hand, if PAC-MAN eats a ghost, you score points. PAC-MAN can only eat ghosts after eating a power pill. Then he can run around the maze eating ghosts. The first ghost is worth 20 points, the second ghost is worth 40 points, the third is worth 80 points, and the fourth is worth 160 points. If the power pill wears off before PAC-MAN eats all the ghosts, he must eat another power pill and start chasing the ghosts again(starting at 20 points again). After PAC-MAN eats a ghost, you only see eyes left on the ghost. But, the ghosts are reincarnated by returning to the big, square chamber in the center of the playfield.

PAC-MAN includes 8 game variations. Each variation has a one-player game and a two-player game. In the two-player games, the left player starts the game. Each player takes a turn until PAC-MAN gets eaten by a ghost.

Games 1, 2, 7, and 8 feature a slow moving PAC-MAN. The ghosts in each of these games move at different speeds as follows:

Games 3, 4, 5, and 6 feature a fast PAC-MAN with the ghosts moving at varying speeds as follows:

Games 3 and 7 are recommended for young children. Game 6 is the most difficult game variation. For a real challenge try Game 6 with difficulty level A.

NOTE: Sometimes the ghosts try to hide behind each other, so they appear to be one single ghost chasing PAC-MAN.