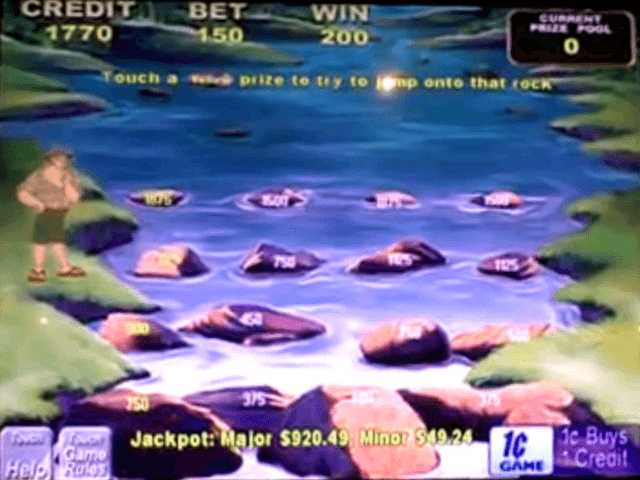 A 5-reel video slot machine with an Australian Outback theme.

During the gamble feature, 1, 2, 5 and 10 credit buttons are used for Heart, Diamond, Club and Spade gamble respectively. This gamble is x4 if correct.
1 and 20 line buttons are also used for red/black double up.

This game was originally going to have seven different Outback Jack features (as well as the random card feature jackpot) where the player could actually choose the features, presumably by touching a road map icon on the screen. On one attraction video (a promotional DVD with multiple attract screens shown on it; this is actually shown on top of gaming machines and surrounded by artwork), it shows the map of Australia with seven road signs; the removed one in the released game is revealed to be 'Mystery Island' with an icon of a fish on it. One such screen with this Outback Jack display can be seen in the members-only Riverside room at Crown Casino, Melbourne, Australia (but it can still be seen from outside the Riverside room as it's only on the second row of machines). This DVD shows animation and artwork of Outback Jack, "Mr. Woo", "L.A. Gator", "Grizzly", "Moon Festival" and "Sun Queen", so it is possibly dated around 2005. As of August 2009, this display has been removed.

The cabinet image pictured on this page still shows the original line 'Choose from 7 Outback Adventures!' but only displays six road signs. On the released version, the large text on the belly panel artwork only reads 'Outback Adventures!' and the game gives you a feature randomly; you can't actually choose the game feature like in the "Lady Luck" series of games. The game tends to favour 'Fishing Spot' and 'Big Rock' the most, and these are well known for having the lowest credit prizes (including zero on 'Fishing Spot' if you don't match anything during the seven free games).

The card feature jackpots are a lot harder to get on Outback Jack than on other games like 'Zorro', and are quite often over the thousand dollar mark for the top prize, whereas a "Zorro" machine usually has the major jackpot at less than $500.

During any Outback Jack feature (such as the Big Rock boomerang throw), the game will display various sayings, such as 'Sheer brilliance', 'Good onya', 'Howzat', 'Your blood's worth bottling' and 'She's all apples'.

Either by accident or design, the version at Crown Casino Melbourne plays the sound named 'WINTUNE32' (the signature Aristocrat large win tune) during the boomerang throw. Other versions simply play the win music corresponding to the amount given, including the coin animation if it's a large win like 1500 credits (on a bet of 1 credit per line).

Outback Jack was also the name of an unrelated TV series in Australia.