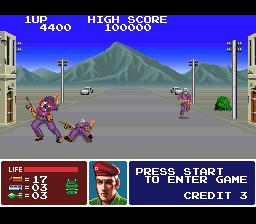 Operation Thunderbolt for Super NES was released in October 1994 in North America.

This port had some differences from the arcade version, including selectable characters and mission order.
SOURCES
Game's ROM.