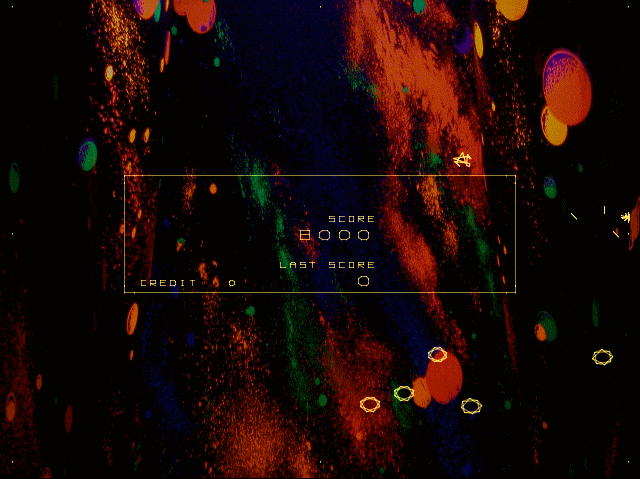 Omega Race was released in June 1981 and was Midway's only vector game created.

According to Arcade Engineering co-founder (and former Allied Leisure designer) Jack Pearson, the idea for Omega Race came when some designers obtained a copy of Atari's "Asteroids" and created a new game by putting masking tape on the screen to create a track and they ignored the asteroids and were trying to fly around the track.

Omega Race differed significantly from "Asteroids" in a few respects. First, there was no 'wrap-around' (where you exit on one edge and return to the opposite edge). The walls would stop the player's fighter if it impacted them. Second, all the information such as high score and ships left were in a box in the middle of the playing field. Last, you could be expected to encounter multiple attackers in each wave. Although Omega Race wasn't a big seller, it still created a following. Unfortunately, this game came out when games such as "Pac-Man" were at their peak.

One thing of note is that the high score table will not display the initial FUK or FUC (early censorship at its best).

Thomas Gault holds the official record for this game with 3290900 points.

* The spinner knob is very sensitive on this game. That means you don't have to turn it too much to make your fighter respond. This can be very helpful if you are attempting to line up a shot and you 'overspin' the knob, thereby leaving yourself vulnerable to an enemy attack.

* When moving around the screen, make sure you keep firing toward the enemy ships. Although shots in this game have a limited range, if you put up a wall of fire, you can catch the enemy Command or Death ships in a nasty trap. Keep in mind that your rate of fire is only limited by how fast you can push the fire button.

* Command ships located in the pack of enemy Droid Ships will not pursue your fighter. This doesn't mean, however, that they aren't helpless. If you get too close to one of these packs, that Command ship will fire on your fighter.

* Enemy fire isn't the only danger you will have to deal with. Command and Death ships also deposit mines. If you don't destroy the Photon mines, they eventually become Vapor mines. Both of these mines can present a major obstacle if you are trying to get away from the enemy or trying to set yourself up into a better firing position.

* If you take too long to bring down a Command ship, it will transform into a Death ship. Death ships are much harder to hit because they fly quickly around the screen shooting and laying mines.

* Don't get to close to any Command or Death ship since both of these ships have pretty accurate fire when they get close to your fighter.

* After Wave 5, a Droid Ship will transform into a Death ship near the beginning of the wave to create an even bigger challenge of getting through the wave.

OTHERS:
VFD tabletop game [US] (1981) by Coleco : Unfortunately, this game was never released.
SOURCES
Game's ROM.
Game's picture.
F.A.Q. by Kevin Butler A.K.A. War Doc.
All In Color For a Quarter - Keith Smith.