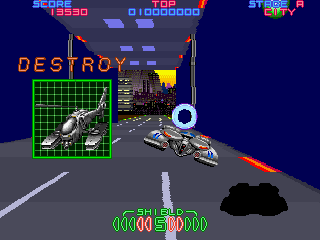 Night Striker is a 3-D shoot-em-up rendered with fast moving, sprite-scaled graphics. Players must guide an armoured hover car through a number of scrolling levels - destroying waves of enemies in the process - in an attempt to rescue a scientist who has been kidnapped by a terrorist organization. A large guardian awaits players at the end of each level, with each one taking several hits to destroy.

Instead of having a set number of lives, the player's vehicle is equipped with a shield that depletes whenever the player is hit by enemy fire or has collisions with either enemies or scenery. The player's shields are recharged at the end of every level.

Night Striker takes its influences from many landmark games of the sprite scaling genre, all of which are Sega releases. The basic shoot-em-up gameplay is similar in style to both 1985's "Space Harrier" and 1987's "Thunder Blade". Some of the game's levels resemble those of 1988's "Galaxy Force II" as well as "Thunder Blade", while the game's level structure - a 'pyramid' of levels that allows players to chose their own route through the game with the use of end-of-level forked roads - is borrowed from the 1986 classic, "Out Run".