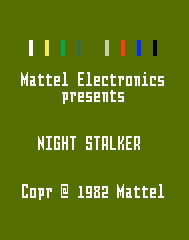 Your man is trapped in the maze. Robots relentlessly track him down. Keep him away from spiders and bats. Watch out for robot fire! React quickly. The key to survival is to destroy them -- before they get the man! Rack up as many points as you can! It's you against them... to the end!