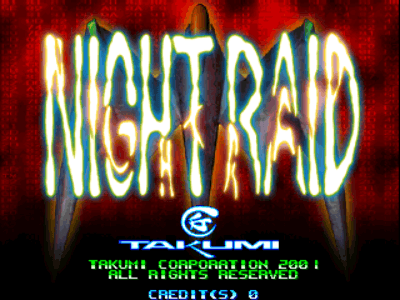 Runs on the "Taito G-Net" hardware.

Night Raid has a triptych scoreboard : the first is your standard high-score (which being a Takumi shmup features no fewer than 9 digits), the second is a record negative score (same number of digits, just below zero), and the third is a mediocre score (what the game refers to as a 'Near-Zero' score).
On the left side of the screen is the Score Thermometer. Each time you kill one of the game's many abstract miscreants, any number of small bonus items will fall from the location of their death. Picking these up raises the thermometer, thus giving you a positive score multiplier. Allowing these items to leave the screen will cause the thermometer to drop, which will result in a negative multiplier once it passes zero. At any given time, the thermometer will gradually ascend or decline to reach zero.

* Secret Item : Bring over 6 power-up items into the screen and wait 3 seconds.