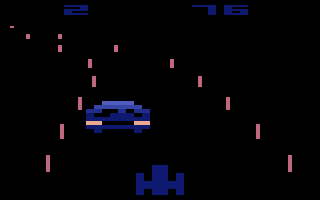 You're in the driver's seat and the track is just ahead of you on the television screen. Your car is permanently fixed at the bottom of the screen, as shown in the diagram. All you have to do is accelerate and steer the car through one of the four tracks. Each time you veer off the track and hit one of the pylons or hit an oncoming car, a simulated crash scene will appear on the screen.

Game variations:
GANES 1, 2, 3 and 4 are timed. At the beginning of each of these games, a "clock" will begin counting down from 90 (seconds) at the upper right corner of the screen.

GAMES 5, 6, 7, and 8 have no time limit. They may be played for an indefinite period of time and there will not be a clock counting down on the screen.

GAMES 1 and 5 have the easiest track (NOVICE) and should be used by beginning players. Games 2 and 6 have the medium difficulty track (PRO). The EXPERT track in GANES 3 and 7 is more difficult than the NOVICE or PRO tracks.

All of the tracks described so far (GAMES 1, 2, 3, 5, 6, and 7) are stored in the program memory of the game. So even though the NOVICE, PRO and EXPERT tracks are progressively more difficult, each track will always follow a fixed course. This makes it possible for players to eventually memorize the track as their driving skill increases.

The RANDOM track, however (GAMES 4 and 8), follows a different course each time, making it challenging for the most skilled players.