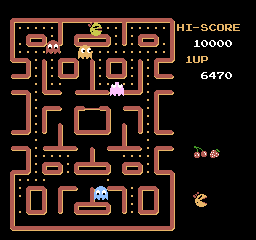 Gobble, gobble, gulp. Ms. Pac-Man chows a power pellet and it's dinner time. Fly around the mazes at top speed while you dine on ghosts and score big points. Watch out! Don't let those little haunters get their hands on you or you're history.