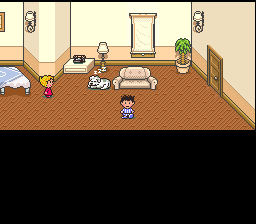 Mother 2, aka Earthbound, is a role playing game by Nintendo and sequel of Mother originally released in Japan for the Famicom system. In the years 199X, a weird meteor crashes in the hills behind Ness's Home in the middle of the night. The young boy, always eager for adventure, sneaks out that night and goes off to investigate the situation. Later on, helped by his neighbor Pokey, he meets Buzz-Buzz on the crash site - this talking bee from the future reveals him that the evil Gigu is planning to take over the world. A prophecy predicted that three boys and a girls will stop Gigu's terrific plans and he knows that Ness, with his psychic powers (called PSI in the game), is one of them... The boy and his friends embark on a journey to save the world and find the eight sanctuaries to reunite the power of the Earth and defeat G?gu. The game follows the same rules laid down by other role playing games of the time - it is however an unique mix of titles such as Final Fantasy and Zelda. The world map is always at the same scale and enemies freely wonder around it - no random battles. However, fights are turn-based and follow a more traditional approach with a brilliant twist - the game automatically skips fights against weak enemies (they may even run away from the player !). Characters have their own set of skills, special abilities and they all complete one another. Ness is the strongest and defends himself with a baseball bat, Jeff is the geek of the group and can repair anything, Paula has super-psy abilities and Poo seems to be good at anything, thanks to his Mu training. Interestingly, the game's progress can be saved by calling Ness's dad on the phone.