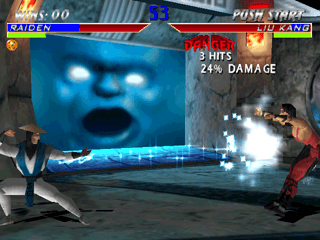 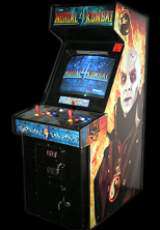 Mortal Kombat 4 was released in September 1997 in USA. It was the first Mortal Kombat game to be rendered in 3-D. Many fans consider this game to be the weakest in the series.

In the pre-release trailers both Reptile and Fujin had God-O-Mite as a name in their lifebars.

Kitana was originally planned to be in Mortal Kombat 4. However, her color palette was changed to brown to make Tanya.

Noob Saibot was originally going to be in the arcade version of Mortal Kombat 4. He made an appearance in a few of the earlier versions of the game.

Unfortunately the game needed more new characters and so in beta version 5 (Release : September 2nd, 1997) Noob Saibot's place on the character select screen was taken by the Kano-like character Jarek. And so Noob Saibot skipped the first official release (known as Revision 1) of the game.

Noob Saibot also made an appearance in the first beta version (Released : September 26th, 1997) of the second official release of the game. In the second beta version, his place was taken by the newcomer, Reiko. This is unfortunately the last appearance of Noob Saibot in the arcade version of Mortal Kombat 4.

Like Kitana and Noob Saibot, Kano was also planned for MK4, however, due to there not being enough new characters in the game, they left Kano out of the roster and put Jarek instead of him.

Jarek directly had Kano's signature moves and fatalities, which caused a lot of complaints from fans simply born by the fact that there was nothing original in Jarek.

Beta 1 - July 25th, 1997
* The Special 'Road Tour' version of MK4.
* 9 Playable Characters : Sub-Zero, Scorpion, Sonya, Liu Kang, Shinnok, Fujin, Raiden, Noob Saibot, and Quan Chi.
* 6 empty spaces
* Auto-Combo's are in the game. Usually some easy combination like 4 High Punches.
* Timer Frozen at '99' the entire match.
* No 1-player mode. 1-on-1 playing only.
* No moves or weapons in this version for Noob Saibot, Shinnok, and Quan Chi.
* Sub-Zero's Freeze and Clone effects not yet implemented.
* Many glitches in gameplay and sounds/graphics.
* The game crashed or reset itself every 10 minutes on average.
* For some reason, the machine didn't like it when you play as the same character as your opponent.
* Moves are extremely glitchy in the corner.

Beta 2 - August 9th, 1997
* Kai and Reptile are now selectable.
* 'Hidden' and 'Random' buttons on Select Screen now work.
* You can now fight against each other with the same character without the game locking up, however the corner glitches and camera problems continue.
* The Game Counter now works.
* The 'Wins' Counter still doesn't work, however there is a 'Top 20 Wins List'.
* Sub-Zero's freeze and clone effects now work correctly.
* Kai's name isn't on his powerbar, and his name isn't announced.
* Shinnok and Fujin get new select screen pictures.
* Noob Saibot, Quan Chi, Reptile, and Shinnok still have no moves or weapons.
* Kai has one move where he stands on his hands.
* Still no 1-player mode. 1-on-1 fighting only.

Beta 3 - August 18th, 1997
* Tanya is now selectable.
* Auto-Combos removed.
* Shinnok's Impersonation moves added.
* Shinnok get a bladed staff, Quan Chi gets a straight edged sword, Tanya gets Sonya's spinning bladed wheel. Reptile and Noob Saibot still don't have any weapons.
* Quan Chi gets a new Green Skull move.
* 1-Player mode now available. The 'Choose Your Destiny' screen moves in full 3-D.
* Reptile and Shinnok still don't have moves.
* Tanya has one move, an air fireball.
* Kai now has a leg spin along with the leg grab when he gets in his handstand stance.
* A number of small revisions were made to this upgrade, fixing small bugs and glitches.
* Select screen switched around. Kai and Reptile are on top, and bottom row is moved around.

Beta 4 - August 22nd, 1997
* Tanya gets her fireballs, Kai gets his fireballs, Quan Chi gets new moves, Shinnok's Impersonations added, Reptile gets new moves, Noob Saibot gets a teleport and slam, and a few other new moves for various characters.
* 'The Living Forest' and 'The Prison' background stages added.
* Many of the glitches from previous upgrades have been cleared up, however the camera glitches and lockups continue to be a problem.
* Noob Saibot gets a spiked club.

Beta 5 (Ver 0.99) - September 2nd, 1997
* Jarek replaces Noob Saibot on the Select Screen.
* Jarek has 2 moves, a Cannonball and a Telekinetic Slam.
* Lots and lots of weapon changes. Kai and Reptile both have Shinnok's staff, Jerek has Raiden's hammer, and Sub-Zero no longer has his axe. Instead, he has some type of sword.
* No Boss, No Character Profiles, No Ending.
* Prison Stage Fatality added.
* Introduction Storyline with Raiden added, without speech.

Ver 1.0 - September 11th, 1997
* First OFFICIAL Release of MK4.
* Raiden's Introductory speech added.
* Only 2 Fatalities in this Version : Sub-Zero's Spine Rip and Shinnok's Leg Rip, where he first must impersonate Sub-Zero, then do the same movement as Sub-Zero's Spine Rip. This may have been an error on the part of the Design Team.
* An Error in the DIP switch settings, where switch one, labeled 'Fatalities ON/OFF' needed to be OFF in order for Fatalities to be shown.
* Prison Stage Fatality movements for most characters added.
* Camera lock-ups and glitches continue to be a problem, this late into development.

Ver 1.44 - September 26th, 1997
* 1st Beta Test of the next Official Release, Version 2.0
* Tested in Chicago only.
* The 3 Question Marks in the middle of the screen are now taken by Johnny Cage, Jax, and Noob Saibot.
* Interactive Background feature added : Scattered rocks in Goro's Lair and Decapitated Heads in the Furnace stages that the players can pick up and throw at each other.
* 3-D Sidestep added, which gives the player the ability to 'sidestep' projectiles by pressing D+RUN
* Computer AI increased
* Sub-Zero has a 'Freeze Wand' for a weapon, with which he can freeze you with. If your opponent picks it up, he can freeze you back.
* 'Danger' added (when you only have a sliver of life left)
* Character Introduction Biographies added, however still no endings.
* Shinnok is at the top of every tower, which denotes him as the
final boss.
* VS. Screen Added, Complete with VS. Screen Codes
* Characters can now throw and drop their weapons.
* Sub-Zero's Spine Rip from Version 1.0 doesn't seem to work in this version.

Ver 1.72 - October 13th, 1997
* 2nd Beta Test of the Official Release, Version 2.0
* Tested in Chicago only.
* 'Reiko' takes the place of Noob Saibot on the select screen.
* Endings have been added for everyone but Reiko.
* Raiden now has electricity flowing effects around him. It happens more often than it did in MK1.
* Sub-Zero's Spine Rip has been enabled again. A red stripe has been added to his face, which denotes that he's the Sub-Zero from MK3/UMK3.
* Sub-Zero can no longer freeze you with his freeze wand after a
breaker move.
* Scorpion has his 'Fire Breath' move, where he takes off his mask, and breathes a stream of fire straight out.
* Tanya has a boomerang for a weapon.
* Jax and Johnny Cage both have fireballs now.
* Jax has his Quad-Throw added.
* Shinnok has a Reiko Impersonation.
* Quan Chi gets a new select screen picture.
* Jarek has a new fireball, different from his previous one.
* A lot of things added to the Attract Mode, like an ad for MK : Mythologies and a 'Powered By : Zeus' ad.
* The game uses a new font for everything but the power bars, just like it was in MK3/UMK3.
* The MAXIMUM DAMAGE system added, which prevents you from doing any combo over 40% in damage.
* The computer draws, uses, throws, and picks up weapons quite effectively now.
* Alternate Color/Clothing system added, where you can do a certain button combination to change the color scheme of your character.
* Instead of the characters being direct palette (color) swaps as it was in MK3/UMK3, the characters now have small differences in their clothing. For example, Sub-Zero can either have his mask on or off, Liu Kang can either have his shirt on or off, etc.

Ver 2.0 - October 15th, 1997
* Second OFFICIAL release of MK4.
* Reiko's Ending Finished, although all he seems to do is walk through a portal in Scorpion's fire stage, and that's it.
* Many more Fatalities Added
* Basically the same as Version 1.72. Just a few bug fixes
here and there.

Ver 2.1 - October 17th, 1997
* Exactly the same as Version 2.0
* The only thing fixed was a nasty CPU bug which was making the computer extremely easy to beat, and even allowing someone to control the computer with the second controller. This was causing arcades to lose revenue, because the game was so easy that you could beat it within minutes to see the endings, then never play it again.

Ver 3.0 - January 20th, 1998
* 3rd and supposedly final OFFICIAL release of MK4.
* Had been testing for about a month in Chicago before going national.
* A 2nd Fatality for every character.
* Stage Fatality added to Goro's Lair where you uppercut them into spikes on the ceiling. Requires a different movement than the Prison Stage Fatality.
* Spiked balls added to the floors of the Purple Stage for throwing.
* Most bugs have been fixed, however camera flaws still exist,
especially in the Purple Stage.
* More Kombat Kodes added.
* New weapon for Johnny Cage.
* Fatality 'Demo' added at the beginning of the game. It shows fatalities being performed, and just before any killing is done, it fades to black and the 'Fatality' sign appears.
* More breakers have been added and switched around.
* Close Captions have been added to the endings for noisy arcades.
* The Combo System has been modified, and Air Combos and linkers are now possible.
* There was a glitch in Version 2.92 (A beta of Version 3.0) where
if you chose the 2-on-2 Kombat, then each player chose either Sub-Zero or Scorpion as 1 of their 2 characters, when the match began, one of each player's characters would be a bloody corpse! The skeletons would fight each other and everything. With the recent remark 'Meat Lives' made on Ed Boon's MK4 Page, the rumors have been flowing on if this corpse is secretly playable in MK4. Meat IS in fact playable in this version.

* Hidden Character Meat : Enter 'Group Mode' and successfully complete the game with all 15 characters. After this has been accomplished, select any character and begin a match. Your character will play as Meat with all the moves of the character that was selected.

* Choose Your Destiny : Use Start button to rotate the tower before choosing it.

* What Are You Waiting For : If you wait for an extended amount of time at the "Select Method of Kombat" screen, the announcer will say "What are you waiting for!?"

* Offensive Words : If you enter an offensive word at the 'Greatest Warrior is...' screen, such as 'DIK' or 'FUK', those initials will be replaced with MK co-creator Ed Boon's initials, 'TRA' or 'MAB'.