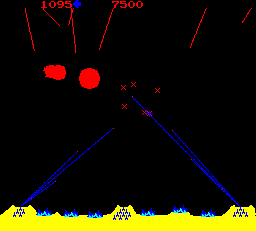 Missile Command is a one or two-player game depicting the outbreak of a nuclear war. Players must defend six cities from waves of incoming nuclear missiles by launching their own anti-ballistic missiles (ABMs) from one of three missile batteries.

The game is played by moving a cross-hair across the sky and pressing one of three buttons to launch an ABM from the corresponding battery (either Alpha Base, Delta Base or Omega Base). Upon reaching the cross-hair the player's ABM explodes, creating a fireball that lasts for several seconds and destroys any enemy missiles that enter it. Each battery is initially armed with ten anti-ballistic missiles and becomes useless when either all of its missiles have been fired or it's been destroyed by enemy missiles.

New enemy weapons are introduced in later levels that increase the level of difficulty; smart bombs that can evade a less than perfectly targeted missile, and bomber planes and satellites that fly across the screen and launch missiles of their own. Missiles from the player's central battery fly to their targets at much greater speed and are the most effective way of destroying smart bombs from a distance.

Enemy weapons are only able to destroy a maximum of three cities per level. A level ends once all enemy missiles have either been destroyed or have reached their target. At the conclusion of a level, players receive bonus points for any remaining cities and unused missiles. Between levels, missile batteries are rebuilt and replenished, while destroyed cities are only rebuilt at set point thresholds (determined by the game's dip switch settings).

The game ends once all cities have been destroyed.

Anti-Ballistic Missiles (ABM) : The defensive missiles you launch to protect your cities. Each missile base contains 10 ABMs per wave. If any missile base is struck by an attack missile or smart bomb, the remaining stock of ABMs for that wave are destroyed, and the missile base is rendered useless until the next wave. You receive bonus points for every ABM you have remaining at the end of each wave.

Cities : There are six cities in total on the screen at one time, three on either side of the Delta Base. If one enemy missile or smart bomb manages to strike a city, that city will be wiped out. When all cities are destroyed, the game is over.

Alpha Base : The missile base on the bottom left corner of the screen. Press the leftmost Launch Control button to launch an ABM from the Alpha base.

Delta Base : The missile base in the bottom center of the screen. Press the middle Launch Control button to launch an ABM from the Delta base.

Omega Base : The missile base on the bottom right corner of the screen. Press the rightmost Launch Control button to launch an ABM from the Omega base.

NOTE: The Alpha and Omega bases launch ABMs at a slower speed than the Delta base, so you must plan further ahead when launching ABMs from those bases.

Attack Missiles : Their only aim is to destroy your cities and missile bases. Every missile wave starts off with a hailstorm of attack missiles. They never deviate from their path. They may, however, turn into MIRVs.

Multiple Independently-targeted Re-entry Vehicles (MIRV) : Surprise! There is no warning when an attack missile turns into an MIRV (with multiple warheads). Think fast. Each new missile that the MIRV unleashes is carefully targeted.

Killer Satellite : A mean-looking satellite that travels across the sky at a mid-level altitude and fires attack missiles. First appears in Wave 2.

Bomber : A big slow-moving target that flies across the sky at a mid-level altitude, but watch out! It fires attack missiles. First appears in Wave 2.

Smart Bomb : Smart enough to avoid most explosion clouds from your ABMs. Your ABM must explode next to one in order to destroy it. You can also squeen it between two explosions to destroy it. First appears in Wave 5.

'LOW' Warning : As soon as there are only three ABMs left in a missile base, the game displays the word 'LOW' underneath that base, and a warning signal sounds. Heed the warning. 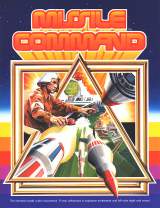