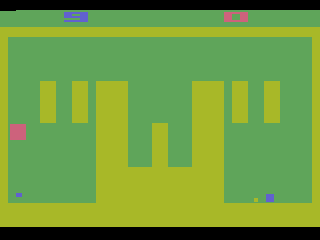 Your sense of timing and your perceptiveness in judging distance are about to be fine-tuned! This exciting video game simulates an actual Miniature Golf course, complete with moving obstacles.

GAME 1 is for one player only. At the beginning of each hole, before the first stroke, the number for that hole is displayed in the upper left corner of the screen. The par for that hole is shown at the upper right corner of the screen. After the first stroke, the player's running score replaces the hole number. A 0 replaces the par until the beginning of the next hole.

GAME 2 is for two players. The left player goes first. After the first stroke by each player, the respective scores are displayed at the top of the screen until the hole is completed. These score totals replace the hole number and the par, as in GAME 1.