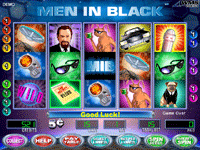 Aliens will overrun casino floors with the introduction of the MIB themed slot game! This video slot is based on the ever-popular MIB movies, and players will enjoy the game as much as they loved the movies.

Landing 3 or more Alien Bonus symbols on an active payline will launch the player into the Find the Alien Bonus. The screen first transitions to a room within the MIB headquarters where Agent Zed cues the player to begin selecting file folders from a field of 20. Each folder reveals one of three things : a credit amount, Frank the Pug, or an Alien Wanted Poster. Players continue selecting folders until an Alien Wanted Poster is found.

Players won't be 'alien'ated from the winnings when they land 3 or more scattered Neuralizer symbols, triggering the Neuralizer Bonus. During this bonus round, players are prompted to select one of the triggering Neuralizer symbols to reveal an award. The player can win a large credit amount, a smaller credit amount with an extra pick, or a trigger to the Top Box Bonus. The player can choose up to 10 times if they continue selecting the extra pick award!

The Top Box Bonus is triggered from within the Neuralizer Bonus. The mechanical feature in the Top Box is a scrolling device that displays a string of illuminated digits. As the digits scroll from right to left, anywhere between three and five digits in the middle of the string are highlighted to form different, random combinations. For example, the three highlighted numbers may be 425, which then scrolls farther to form 257, which becomes 579, and so on. The scroll begins quickly and slows down before eventually stopping on a three to five-digit combination that is awarded to the player in credits.