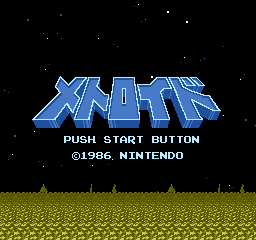 Metroid is an action/platform game and is the first installment of Nintendo's classic and Alien-influenced series. In a distant future, Space Pirates wreak havoc to the galaxy, relentlessly attacking ships from the Galactic Federation. Unable to prevent the attacks, the Federation decides to gather bounty hunters (called 'Space Hunters' in this version) to counter the threat. But now space pirates have attacked a research facility and stolen an unknown life-form (that the scientist named 'Metroid') recently found on planet SR388 before it could be safely brought back to Earth. The federation must now send a space hunter to infiltrate the pirate headquarters hidden on planet Zebes and stop them before they turn the Metroids into deadly weapons. The bounty hunter Samus Aran, the female protagonist of the game, accepts the mission and she has now to travel deep inside the enemy underground fortress, through five vast areas built around complex networks of caves and rooms. Her primary task is to defeat the space pirates and all the aliens she faces, up to the toughest of them all - the monstrous Mother Brain. Although Samus can jump and fire a simple Arm Cannon, the first upgrade she collects is the Maru Mari, most commonly known as the Metroid trademark morph ball, which gives her the incredible ability to roll into a ball and to rush through narrow corridors and tunnels. But the morph ball is only the tip of the iceberg and countless other weapons and abilities are available for the taking later in the game, such as missiles, morph ball bombs, ice beam, wave beam, high jump boots, increased defense, energy tanks (which increase her maximum life) and so forth. Zebes is incredibly vast but unlike other games in the series, this first episode of Metroid doesn't feature a map (dedicated players had to draw their own). Finally, the Famicom Disk version includes a three slots savegame system. 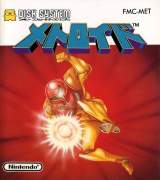