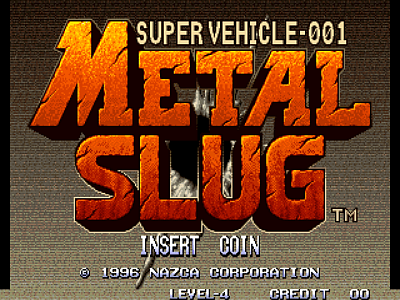 A scrolling 'run-and-gun' platform game for one or two players, Metal Slug is a humorous parody of war and specifically of World War II and the Nazis.

The game features six enemy-packed levels, referred to as 'missions'. Players start the game armed only with a pistol, but extra weapons can be picked up and used for greater firepower. Also, at certain points during a level players will find an unused 'Super Vehicle-001' - or Metal Slug - tank which can be entered and driven. The Metal Slug is slow-moving but has very powerful weapons. If the Slug takes too many hits it will break down and start to flash, the player must then quickly exit the vehicle before it explodes. The enemy troops also have vehicles at their disposal, such as tanks, boats and helicopters.

The levels are littered with bearded hostages who, when rescued, award players with either points bonuses (in the form of medals) or weapon power-ups. Available weapons are Heavy Machine Gun, Flame Shot, Rocket Launcher and Shotgun. Hand grenades are also available.