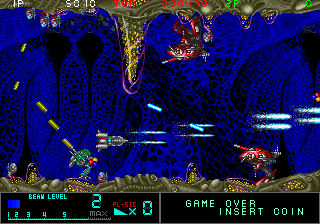 Earth is under attack from an alien race from the 'Nemesis' region of space, and human civilisation now stands on the brink of collapse. The invaders have utilised energy molecules - known to earth scientists as 'Newalones' - to create powerful beam weapons with which to attack Earth. In response, Earth's scientists have developed the 'Black Fly' project; a powerful space craft that utilises the same Newalone molecule technology of the alien aggressors.

Metal Black is a very playable sideways scrolling shoot-em-up which manages to feel different to other games in the genre, due to the fact that it lacks a a player-definable weapon power-up system. Instead of collecting items that provide extra speed, different weapons etc. players must collect the clusters of 'Newalone' molecules that float around each level. These molecule clusters will gradually increase the player ship's firepower.

As long as the Metal Black ship has sufficient firepower, players can activate the 'Beam Weapon', which generates a powerful energy beam that destroys everything it comes into contact with. The Beam Weapon will only last for a few seconds and its use will reduce the ship's energy levels. Once the Beam weapon de-activates, Metal Black will have vastly reduced firepower for its forward-firing laser cannon. Players must once again collect the Newalone molecule clusters to build up the ship's firepower.