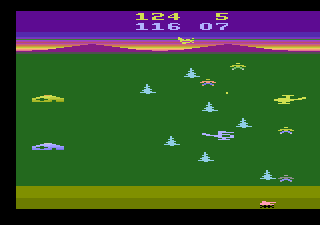 You are Hawkeye Pierce, Chief Medical Surgeon of the 4077th MASH. Your responsibilities include rescuing injured men from the battlefield, performing sur-gery in the operating room, or, in an alternative game, picking up Colonel Potter's skydiving medics. You pilot your chopper low through the trees, avoiding shells fired at you from a North Korean tank. After picking up the medics orr wounded and rushing them back to the hospital, the pressure really starts to get heavy. Time is running out for the injured men and you must operate. You have to work fast. You are competing with your fellow surgeons, either B.J. Hunnicut, Trapper John McIntyre or Frank Burns.

There are 8 play levels (or games) in MASH. Each game consists of several rounds. A round ends when a certain number of men have been rescued. Between each round surgery is performed in the operating room. The exception is in games 7 and 8 which are devoted totally to the surgery game. The games are won by the first player to reach 999 points.

GAME 1 - In this game you, Hawkeye, must rescue more men than your computer opponent, Frank Burns. With your joystick, you maneauver through the forest of trees and pick up men by touching them with your helicopter. After rescuing 5 men your chopper will appear overloaded and you will not be able to take on more wounded until you have dropped them off at your MASH base. Every time you return to the base the point value of each man rescued is increased by 2 points. The maximum point value for a rescued man is 25 points. The North Korean tank at the bottom of the screen will chase the chopper which has the most points, and will launch projectiles whic you must dodge. If a chopper collides witha projectile it flutters to the gorund, where it is rescued by Klinger in the ambluance. The round is voer after a total of 30 men are rescued. The airplane has no function in this game.

Between each round a bonus round of surgery is performed in the operating room where you must remove as many pieces of shrapnel as you can in 15 seconds. Shrapnel must not touch the patient. If it does, the bonus surgery round is over In the normal variation (difficulty B) Frank Burns receives no points in the bonus surgery round. In the challenger version (difficulty A) Frank Burns receives 8 points per second plus the opint value of the shrapnel if it touches the patient.

GAME 2 - This game is identical to game 1 except the 2 players play against each other. One player uses the left joystick, while the other uses the right joysitck. In the operating room each player gets 15 seconds to removes as many pieces of shrapnel as possible. (For more details on surgery see games 7 and 8.)

GAME 3 - When we last left Colonel Potter he and his skydiving medics had just jumped from a plane without parachutes. Your mission is to rescue them before they reach teh ground. You maneuver your helicopter around the trees in order to rescue more medics than your computer opponent Frank Burns. Each man rescued is worth a variable number of points. The close your chopper is to the ground when a medic is rescued the more points you receive (points vary from 5 at the top to 20 at the bottom). The North Korean tank at the bottom of the screen will chase the chopper who has the most points, and will launch projectiles which you must dodge. The round is over when a total of 40 medics have been rescued.

Between each round a bonus round of surgery is performed in the operating room. You have 15 seconds to remove as many pieces of shrapnel as possible. Again Frank Burns will receive no points in the nomral version. However he will receive points in the challenger variation. (See games 7 and 8 for more details.)

GAME 5 - The shooting has stopped but the wounded keep coming. Playing this game is similar to playing game 1 except that the tank has stopped launching projectiles. You also have smaller helicopters for ease in rescuing the injured men.

GAME 6 - This game is identical to game 5 except that 2 players compete against each other, one using the left joystick while the other uses the right joystick.

GAME 7 - You're in the operating room where you must remove bits of shrapnel from an injured man using your extractor. You play against Frank Burns who receivs 6 points per second. Each piece of shrapnel is worth a varying unmber of points depending on the difficulty of its removal. If the shrapnel touches your patient while it is being removed your turn is ended. Point values range from 15 to 80. In the challanger version (left difficulty switch in position A), Frank Burns receives the point value of any piece of shrapnel that touches the patient.

GAME 8 - This game is very similar to GAME 7 except that each player has 15 seconds in which to remove as many pieces of shrampen as possible. When his turn ends, the next player's turn starts. And in the challenger variation (difficulty switch in position A) your opponent receives points if the shrapnel touches the man while it is being removed.